Plastic in the Ocean

A polymer is made up of many monomers. 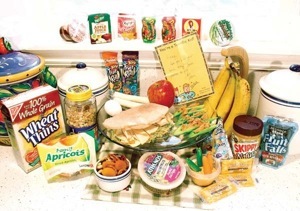 How many of these foods are packaged in plastic?

Plastic often ends up as litter on our beaches. 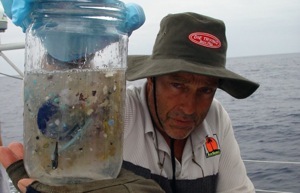 A water sample from the North Pacific Gyre contains more plastic than plankton. 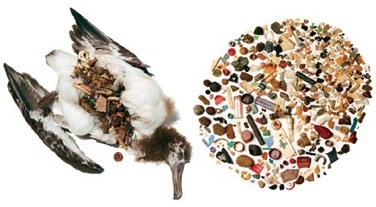 Scientists found 1603 pieces of plastic in this bird's stomach.

The top ten categories of debris in the ocean:

Carcinogen: Any substance that is known to cause cancer

Crude Oil: A mixture of naturally occurring hydrocarbons that is found deep underground and is generated naturally from decaying plant and animal matter over millions of years; crude oil is refined into products like diesel, gasoline, and plastics

Current: The steady flow of water in a specific direction

Decomposer: An organism that consumes dead or decaying matter

Endocrine System: A system of glands throughout the body, each of which discharges a type of hormone into the bloodstream to regulate body functions

Enzyme: A substance that speeds up a reaction

Monomer: One unit in a polymer

Necropsy: A medical examination that takes place after the death of a non-human organism

Nurdles: Plastic pieces under 5 mm in diameter that often resemble zooplankton and other common sources of food for marine species

Pacific Trash Vortex: The accumulation of trash in the North Pacific Gyre

Physiological: Relating to the body

Plankton: Small organisms that float or drift in large numbers in both fresh and saltwater

Polymer: Large molecules composed of repeating structural units (made up of carbon and other elements); each unit in a polymer is called a monomer

Recycle: To treat or process used or waste materials so that they can be used again