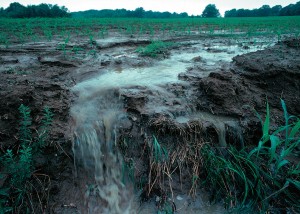 Fertilizer runoff from farms is one human source of eutrophication. In this picture, rainwater is washing over fertilized fields, sweeping up fertilizer-infused soil, and washing it into rivers, and eventually out to sea. 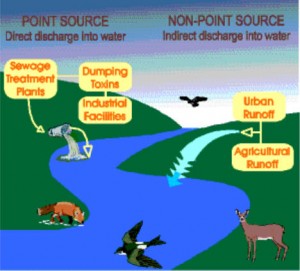 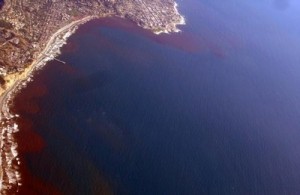 Eutrophication may trigger harmful algal blooms. The nutrients delivered to the coastal ecosystem through point and non-point source pollution enhance the growth and reproduction of algae, including Karena brevis, the algae that causes Florida Red Tide. 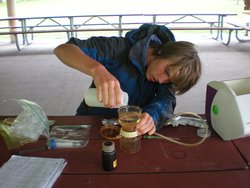 A scientist monitors water for harmful algal blooms. Water sample are kept in dark containers, such as the cooler on the right, until they are processed. This scientist is filtering the water by placing it in a funnel whose bottom is lined with a carbon-fiber filter. The filter will trap tiny particles, including microalgae, which will then be extracted by placing the filter in a chemical called acetone. The acetone will extract the microalgae from the filter, and a machine called a fluorometer will measure the reaction of the acetone and sample solution when light of different wavelengths is shined on the sample. This reaction indicates the amount and type of microalgae in the sample.

Eutrophication: The process in which excessive nutrients are added to an aquatic system.

Hypereutrophic: Having too many nutrients.

Hypoxic Zone (Dead Zone): Low-oxygen areas in the world’s oceans where most organisms struggle to survive.

Nutrient Loading: The rapid addition of nutrients to a system