Wind farms are one source of renewable energy.

Burning fossil fuels releases carbon dioxide into the atmosphere, which is can be harmful for the environment and human health. 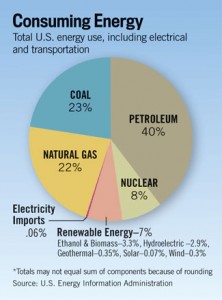 A pie chart of energy consumption in the United States.

The ocean has the potential to provide renewable hydropower in a variety of ways. Let’s explore a few of the latest technologies:

1. Ocean wave energy is captured directly from surface waves or from pressure changes below the water’s surface caused by waves. 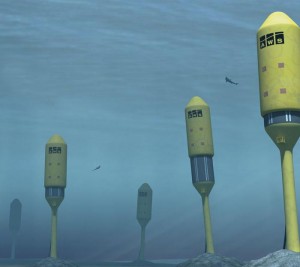 2. Tidal power is a form of energy that converts the energy of tides into electrical energy. 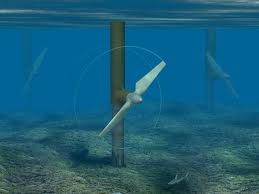 This turbine is being used to harvest tidal power.

3. Offshore wind farms are groups wind of turbines located far from the coast.   Similarly to tidal turbines, they convert wind energy mechanical energy, which is further converted into electricity. 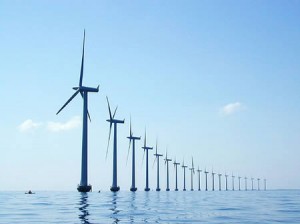 6. Algae (any living thing found in an aquatic environment that obtains energy from sunlight through photosynthesis) can be used as a biofuel. Biofuel is fuel derived from living things, usually plant mass. 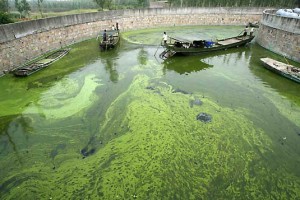 Algae can be farmed and harvested for use as biofuel.

Energy: The ability to do work.

Energy Source: A source from which energy can be obtained.

Fossil Fuel: Fuel consisting of the remains of organisms preserved in rocks beneath Earth’s surface over millions of years; includes petroleum, coal, and natural gas.

Gulf Stream: A warm ocean current that flows from the Gulf of Mexico northward through the Atlantic Ocean.

Hydropower: Power derived from the energy of moving water.

Marine Current Power: Energy captured from the movement of currents.

Natural Resource: A naturally occurring material that is valuable to people and/ or wildlife.

Nonrenewable Energy: Energy derived from a source that we are using up but cannot replace.

Nuclear Power: Energy derived from the splitting of a large nucleus into multiple smaller nuclei.

Ocean Thermal Energy Conversion (OTEC): A process that uses the temperature differences that exist between deep and shallow waters to run a heat engine.

Ocean Wave Energy: Energy captured directly from surface waves or from pressure changes below the surface of the water that are caused by waves.

Renewable Energy: Energy derived from a source that is naturally replenished over time.

Tidal Power: A form of energy that converts the energy of tides into useful forms of power.

Tidal Range: The vertical distance between the high and low tide each day.

Turbine: A machine that converts moving energy into mechanical power, which can then be used to generate electricity.